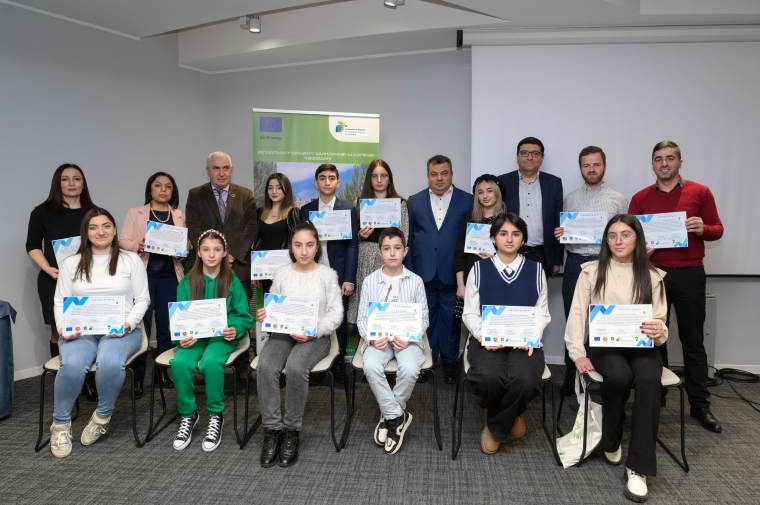 On December 22 the awarding ceremony of the winners of the contests held by "Covenant of Mayors East" project and Union of Communities of Armenia in the framework of EU Sustainable Energy Week-2022 was held in Yerevan.

The event was attended by Mr. Ashot Giloyan, Head of the Policy Department of Local Self-Government of the Ministry of Territorial Management and Infrastructure of RA (Coordinator of the Agreement), Mr. Emin Yeritsyan, President of the Union of Communities of Armenia, as well as staff representatives of local authorities and residents of signatory communities and the winners of the contests.

In his welcoming speech, Mr. Giloyan stressed the importance of participation not only of local authorities, but also residents of signatory cities and, in particular, young people and children in the activities organized during EU Sustainable Energy Week. He stated: "Since 2019, almost every year, except 2021, various events and competitions have been organized in many Armenian communities on the subject of sustainable and green development. At the same time, not only the geography of spending such energetic days is expanding, but the events themselves are becoming more diverse and informative. It is particularly important that children and young people become the main participants of energy days”. Mr. Giloyan said.

Mr. Yeritsyan stressed the need for more active involvement of municipalities in the implementation of local sustainable and green development strategies. He said: "Energy Days should not be seen only by local governments as formal events organized in the context of the “Covenant of Mayors” project, because in fact, they are one of the most effective mechanisms to raise awareness of the population and to insure active involvement of the population’’.

Mr. Artem Kharazyan, national expert of the Project represented the participants of the ceremony the main obligations of the signatory cities as well as about the objectives of the project in Armenia.

A detailed overview of the activities organized by Armenian communities as part of the EU Sustainable Energy Week in 2022 was presented in the presentation by Ms. Tatevik Harutyunyan, communication project expert. In particular, it was noted that in EU sustainable energy week-2022 9 communities took part in organizing 50 events and competitions.

At the final part of the ceremony, the names of 12 winners of 4 contests were announced, as well as the names of three most active organizers of energy days in the communities.