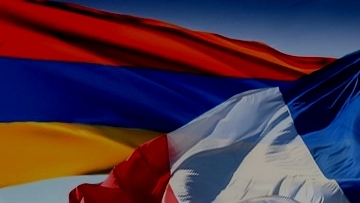 April 7, Readings of French poetry and French songs and competitions will be held at Abovyan Children Support Center.

April 4 at 14:00 in Alaverdi St. An open lesson from geography will be held at the N 5 high school after Shahumyan entitled "Religious Issues in France".
April 6, "Following the Traces of the French" will be held. Trip to Alaverdi and Akhtala ("ACP" CJSC Museum, Madan district, Akhtala city).
April 14, at 09:00 in the town of Alaverdi, The essay competition will be held at the 5th high school named after Shahumyan titled "France and Tolerance".
April 15, a rafting ceremony within the framework of the Debed River project, implemented in the framework of cooperation between Lori region and PAKA, will be held in Alaverdi (with the participation of the French)
April 18 at 13:00 in the town of Alaverdi, There will be a math - musical performance under the title "From Raphael to Rap" at the N5 high school after Shahumyan.
On April 26 in Alaverdi Vocational School and 5 High School will take place a competition in French language based on the works of French writers.

April 28, at 15:00, at the House of Culture of the city of Armavir will take place a performance dedicated to Charles Parro's works.

April 21, The opening ceremony of the Francophonie Days to be held in Armavir Art School

April 14, at 15:00 Artik Art School will host an exhibition featuring the French painter in Armenian children's works
April 20, at 15:00, Artik V. An event will be held at the House of Culture named after Samuelian, France, for the Armenian cradle.
April 21 at 3:00 pm the "Red cap" performance will be held at Artik Art Center

From March 11 to April 15, the main exhibition hall of the Dilijan Museum will be hosted by Painter Jean Batista Groz. The genre of the portrait and his contemporaries, the Rococo ".
Echmiadzin
April 11, at 15:00, the Mayor of Echmiadzin Hovh. A literary and musical event will be held at the Hovhanissian Central Library.
French film screening to be held in Ejmiatsin municipality on April 15 at 4 pm
April 13, a discussion on the topic "Where Is Coffee Comes" will be held at Talin City Council's French Language Learning Center.

April 28, a reading contest will be held at the French Language Education Center in Talin municipality.

April 10, at 15:00, a traditional "Fairy Tale Festival" will be held at the State College of Sevan.
April 17 at 14:00 a screening of a joint summer work with Armenian and French students will take place on the second floor of Sevan State College.
April 18 at 3 pm a puppet show will be held at the N3 "Fairy" kindergarten in Sevan.
April 19, at 16:00, musicians from Sevan will perform French composers' works.
April 20, at 15:00, a screening of children's films will take place at the N1 N1 N / A.

April 11, at 3:30 pm, The Aghajanyan Art School will host an exhibition dedicated to French artists.